Well, that was the plan. As it happened, it became Reading to Penzance by Night Riviera sleeper, as it was cancelled from London.

Despite travelling extensively by train in the UK and Europe this was to be my first ever experience of a sleeper train. There’s an interesting contrast between the futuristic concept of falling asleep in one place and waking up in another, and the grand tradition formed over more than a century of sleeper trains.

The journey to London was pleasant, a discounted first class ticket and an empty carriage put me in a very relaxed mood on arrival at Paddington. I’d arranged to meet a friend for a few drinks before making my way over to Platform 1 around 10.30 in time for a drink in the lounge car and hopefully a good nights sleep soon after departure at 11.45.  Not to be.

The first sign of any trouble was the complete absence of a sleeper train on Platform 1. I was assured that this was the departure platform – right next to the statue of everyone’s favourite Peruvian ursine export. Perhaps it was on another platform? No, due to “technical difficulties” it was starting from Reading and passengers were advised to catch the 23.30 service to Cardiff and change to the sleeper there.

This I did, though this was going to delay my shut-eye by a good hour or two, and I’m a man who needs his six hours. On arrival at the glass and concrete sprawl of Reading station, the sleeper train was handily on the adjacent platform. All the platform staff had apparently already turned in for the night, so I wandered down the narrow corridors of the sleeper carriages until I found a steward who directed me to my room.

“Compact and bijou” would be how I’d describe my moving hotel for the night. The carriages have been refurbished recently and contained charging points and handily concealed sinks and closests. The bed however looked pretty damn narrow so I felt a drink from the restaurant car might be necessary in order to help me drop off.

I’d imagined a grandiose restaurant car with passengers from all walks of life mingling over cocktails and fine wine. What I got was a buffet counter serving overpriced goods and a few empty tables. I trudged back to my room with a £5 miniature of questionable white wine feeling that this wasn’t quite the experience I’d hoped for.

By this time it was after 1am and we still hadn’t left Reading. The steward was due to wake me at 6.30 with orange juice and a bacon sandwich, so it was time to turn the light off and hope the Vin Ordinaire did its job.

I did manage to sleep reasonably well, and woke up just before 6am as the train was pulling away from Plymouth – good timing as shortly after leaving the station, the train crosses the Royal Albert Bridge. Designed by Brunel, it crosses the river Tamar that separates Plymouth in Devon with Saltash in Cornwall. The sun was coming up and boats were bobbing in the water as we crossed the bridge.

A short while later I got a knock on my door from the steward, who was carrying my large bacon baguette and a whole carton of orange juice.  I wolfed this down while looking out the window to a depressingly grey morning and the Cornish landscape – most of the route is inland and the countryside is pleasant, not spectacular.  There was mist in the air as we approached Truro and I spotted the cathedral from the viaduct crossing the city. 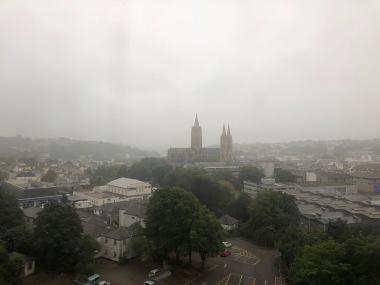 As the train approached Penzance shortly before 8am I got my first glimpse of the sea, and although it was drizzling, the sun was trying to break through the clouds which promised a brighter day.  A rainbow formed over the station as I disembarked and began my mini Cornish adventure.

My ticket was booked three months in advance and cost £75, which I would suggest is a bargain for a train journey of several hundred miles, and a bed for the night.  The cancellation from London put a bit of a dampener on the experience, but it’s certainly one I would repeat again – especially as I absolutely loved Cornwall.

Please follow my blog by clicking on the links below…