A weekend with my sister and brother-in-law in Ghent had been booked for June 2018, but I decided a few more days away were required so landed on the idea of going to Utrecht, a city I’d heard good things about.  I booked the direct Eurostar to Amsterdam for the Wednesday morning, and after my sojourn in Utrecht I could travel to Ghent by train to meet them on the Saturday morning.

I wasn’t having much luck finding an affordable central Utrecht hotel and decided to go a bit left-field, finding an AirBnb in the small town of Breukelen, about 10 minutes from Utrecht.  It’s a local station on the main Amsterdam – Utrecht railway so I could get to both cities very easily.

Breukelen (where Brooklyn in New York was named after, a proud local told me) is a very pretty little town sandwiched between the Rijnkanaal (a wide river busy with large freight ships) and the smaller Vecht river.  The railway line is on the far side of the Rijnkanaal and about a 20 minute walk to town and to my lodgings for the next few nights, actually a bungalow in the back garden of someone’s house!  It was very comfortable and only £40 per night. 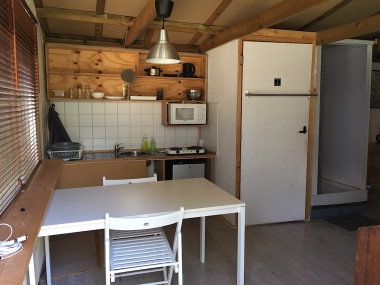 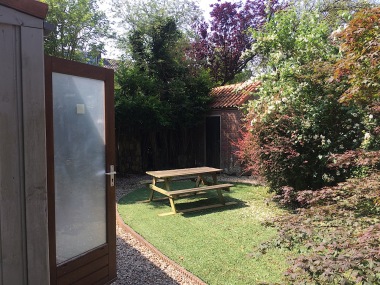 The town itself is lovely, with two small churches and a wide central square flanked by cafes and restaurants.  The weather was scorching and I sat in the shade outside one of these café’s and cooled down with an ice cold drink and a snack of calamari.  The pace of life seemed slow and relaxed, everyone looked cheerful and everything seemed right with the world in this little corner of Holland.

Beyond the square a narrow street led to a manually operated drawbridge over the Vecht river, the fun-loving little brother of the Rijnkanaal, with its waters populated by pleasure cruisers rather than container shops.  I decided to walk along the Vecht  towards Utrecht – on the far bank is a cyclepath and towpath, but I chose the main road on the near side as I wanted to stop for lunch at a restaurant half way to the town of Maarssen.

It was a good choice.  The road wasn’t too busy and I walked past the Kasteel Nijenrode, a historic building which seemed to now be a conference and wedding venue.  The restaurant was called Buitenplaats Slangevegt, a pretty upmarket place which seemed a popular place with the great and good of Utrecht.  There was a large terrace and I had a light meal of focaccia and goats cheese while soaking up the rays and watching the boats pass by.

I walked on to the town of Maarssen, another pretty place with a similar vibe to Breukelen – there’s certainly a lot of money in this area judging by the large houses and gardens I walked by.  I lingered here a while before crossing the Rijnkanaal to Maarssen station and catching a local train to Utrecht.

If ever a railway station were to give a false impression of the place it serves, this is it.  Utrecht Centraal is huge, modern and bustling, and as you exit you are faced with a small square leading to an even more enormous shopping centre, the main route to the centre of town.  Fortunately when you eventually go down the escalator at the far side of the HoogCatherine mall, you leave modern metropolis behind and enjoy a beautiful canal-based city, which looked even better in the glorious sunshine.

There’s definitely an element of “little Amsterdam” when describing Utrecht, but that’s more about the look rather than the feel of the place.  Yes there are the canals, the lovely old buildings, the plentiful cafes and coffee shops, but there’s few tourists and plenty of students (it’s a big University city).  The central canal that runs through it is it’s crowning glory, café’s line it’s sides both at water level and on the streets above (see cover photo and below).  The weather was so good that even during the week every terrace was rammed with people eager to have a beer in the sun – me included.

Away from the canal there’s historic sights, including the cathedral and separate tower,  wide tree -lined squares and quaint narrow streets.  As is the norm in mainland Europe, al fresco dining is positively encouraged, I particularly enjoyed some bitterballen with a beer from the IJ brewery in Amsterdam.

Good weather always has a positive bearing on your opinion of a place, and the glorious sunshine and canal-café culture couldn’t fail to impress, but I think that Utrecht would have a lot to recommend it whatever the weather.  I spent a lovely few days in this area before heading to another historic city criss-crossed by canals – Ghent.