For those of you unaware of Scheveningen (as I was before I booked the trip), it is a beach resort in The Hague, Netherlands. It was April 2017 and I fancied another trip back to my favourite country and read about Scheveningen (pronounced something like skay-fur-NING-un) and the Kurhaus Hotel, which looked and sounded like Grand Budapest Hotel By-The-Sea.

I travelled by Eurostar to Brussels then by Thalys, but instead of going on to Amsterdam as usual, I alighted in Rotterdam and caught a local train to Den Haag (The Hague) from there.

You can get frequent trams from the centre of The Hague to Scheveningen and the journey takes around 20 minutes, which gives you a good look at the city itself. It’s a mix of modern in the immediate city centre, then historical, leafy wide tree-lined streets as you head through the suburbs – very atypical for Holland. There’s also plenty of embassies with The Hague being a centre for the European parliament.

Kurhaus from the beach

Interior of the Kurhaus

The tram dropped me right outside the Kurhaus hotel, my base for the next three nights. It’s an imposing sight, whether seen from the front entrance or from the beach behind it. The décor and rooms were old-fashioned but charming, and it was a lovely change from a lot of the modern identikit hotels I stay in.

The weather was pleasantly warm but it wasn’t quite the summer season and I stayed midweek so it was fairly quiet. The beach is wide and lined with restaurants and beach bars – I imagine it is very lively on summer weekends.

This was very much a relaxing holiday rather than a partying one – I had some lovely seafood meals and enjoyed a few drinks looking over the beach. I popped to Amsterdam for the afternoon one day (45 minutes by train) and spent another afternoon wandering around The Hague near the Binnenhof (the main government buildings). The weather was lovely and this historic part of the city was a very pleasant place to walk around. 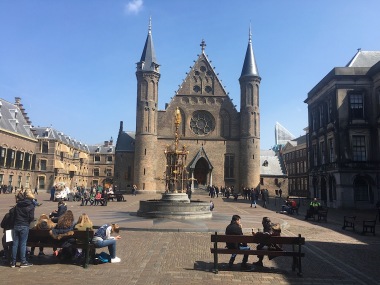 Square by the Binnenhof 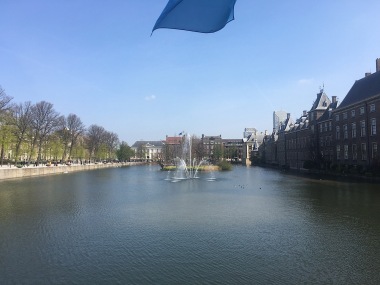 Lake behind the Binnenhof

I’d definitely come back to The Hague and fancy a Summer Saturday Night In Scheveningen one day!